Heading back to the Oregon Coast after visiting Silver Falls State Park, we stopped at Trader Joe's and gassed up the Roadtrek in Salem, OR, where on 06 Sep 2019, regular unleaded gas was the lowest price of our trip to date at $2.73.9/gallon! From Salem, we headed to Newport, OR, where we planned to visit the Oregon Coast Aquarium. Whereas, I had visited the aquarium once in 1997, Margaret was very much looking forward to her first visit.

Using a combination of sources (Google, Campendium, FreeCampsites.net, etc.), we drove south for a few miles on U.S. Route 101; and all we saw were sign after sign stating, "CAMPGROUND FULL." After striking out with campgrounds, we tried RV parks. After stopping at a couple of those that were also full, we parked and called several more—all of which were full! We briefly considered parking overnight at a casino south of Newport but decided against that because it was much too far away. So after trying for several hours, we decided to give up on visiting the aquarium. (I think I was more disappointed for Margaret than she was for herself.) We decided, instead, to concentrate on finding a place to camp farther down the highway. It was getting late; and, after a long day on the road, we were pooped!

[Note: It's been nearly four months since our last blog entry; and for that, I apologize. After five months taking in all of the scenic beauty during our West Coast States Adventure, it was a bit of a shock to arrive at home base and stay put. Since returning to San Diego County last October, we have been camping only once! Margaret did have some (ultimately, mostly inferior) mechanical work done on the Roadtrek. Early this year, both Margaret and I had some very unpleasant and long-lasting colds. We had out-of-town company stay with us for two weeks; and during that visit, our world came apart with the COVID-19 pandemic. We have been sheltering in our respective "tiny homes" (RVs) for three months so far, and our next great adventure that we had hoped to start in April has been postponed indefinitely. Although this period of self-isolation would have been the perfect time to publish the remaining entries from our last year's trip, simply put, I haven't been able to commit to looking at the photos; not knowing if or when we'll be able to travel again is extremely heartbreaking, as it is. I shall try to adjust my thinking and get_them_published. Thank you for your patience. We hope you enjoy visiting all of the locations featured here.]

September 5th, 2019, was a very long day. After leaving Kilches River County Campground and visiting Cape Meares, we headed south on U.S. Route 101 to Hebo, OR, where we turned east on Highway 22 toward Salem, OR. 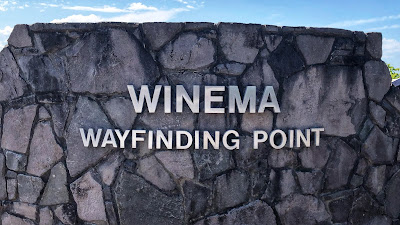 Winema Wayfinding Point on U.S. Route 101 near Neskowin, OR. Photo by Virginia.
Read more »
By Virginia Hill at 3:58 PM No comments: