Goodale Creek Campground was another beautiful location we were reluctant to leave. Margaret found it using the Campendium app after we'd spent the previous night on U.S. Forest Service Land northeast of the town of Big Pine: a location where we thought we would have a cell signal, some quiet time, and great views. It turned out there was a peek-a-boo signal (which is highly frustrating!), and we also had an incident of a disgruntled, drinking person, who showed up the following morning. He seemed very displeased that we were camping where he wanted to meet someone. He did finally leave without incident.

We ended up driving back into Big Pine seeking a signal and a new place to camp—hence, our lovely six-night stay at Goodale Creek Campground. What an amazing alternate choice it was! 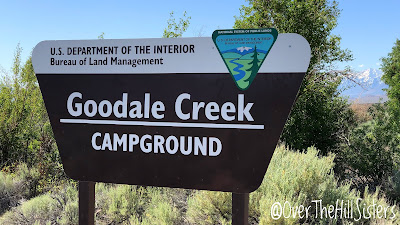 After leaving Alabama Hills on 05 May, we stopped briefly in Lone Pine for some more groceries and at the post office to mail some things and pick up a General Delivery item for Margaret. We got on our way with plans to stop just 12 miles north at the Manzanar National Historic Site, known officially beginning June 1, 1942 to its closing as the Manzanar War Relocation Center. 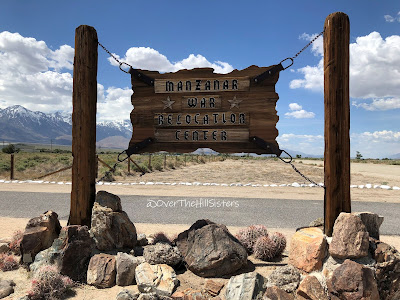 The sign's appearance hasn't changed. All photos by Virginia.

We left Red Rock Canyon State Park on the morning of May 1, once again heading north. We stopped briefly in Pearsonville to catch up on our iPhones, to call my daughter, and to get veggie subs at Subway. (We added our own tasty vegan Provolone cheese, Tofurky deli slices, and our preferred special condiments to make them extra yummy!)

We drove to Lone Pine to get a few groceries (mostly produce). All the while, I was gawking at Mount Whitney, which is a major draw for hikers/mountaineers. Then we let Google Maps continue to direct us to our next camping adventure—Alabama Hills—where we hoped to boondock for a few days. [NOTE: In March 2019, Congress designated the Alabama Hills as a National Scenic Area as a part of the John D. Dingell, Jr Conservation, Management, and Recreation Act.] After searching for an easily accessible campsite just off the main road (Movie Road) so Margaret’s Roadtrek wouldn’t bottom out on the rocks and potholes, we found a perfect pull-through site next to Movie Road farther in after it turned into a smaller dirt road. It was close enough to level that we only needed one leveling ramp. The view made almost anything worth it! 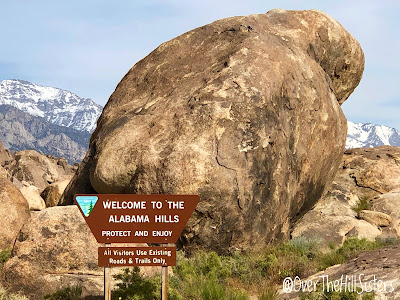 And what a welcome it is! Photo by Virginia.
Read more »
By Virginia Hill at 6:18 PM 4 comments: 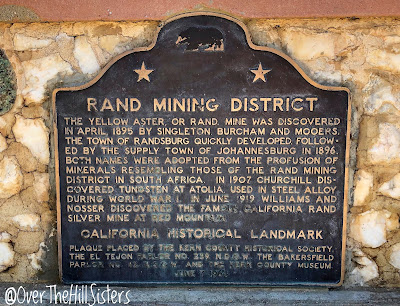