It has been over five weeks since our last entry. Sorry! Mainly, the gap was due to the lack of a constant/decent cell signal and our not being overly keen to spend days utilizing the universally pitifully slow Wi-Fi at public libraries. Another critical component in posting to this blogging service is it needs to be done on a computer, and my laptop display bit the dust on our way south. We are back in San Diego (our home base), and I have my laptop hooked up to a small flat-screen TV until I can replace my display. So, it's catch-up time!

We left Fort Townsend Historical State Park in Port Townsend, WA, on the morning of 15 Aug 2019 and headed southwest on WA State Route 20 to U.S. Highway 101. We stopped in the adorable town of Sequim, WA (skwim), to do some grocery shopping and were both impressed by how clean and lovely the town was. We stopped very briefly for me to take some photos of sparkling Lake Crescent in Clallam County, WA, before continuing west. If I am remembering correctly, when we saw the first sign for La Push, I asked Margaret if we could go there first before continuing south. Happily, she said yes; so we took WA State Route 110 to First Beach. It was a steely gray-sky day with only a few surfers on the small swells and a handful of people walking the shore. After taking quite a few photos, we got back on the highway headed to Forks, WA. 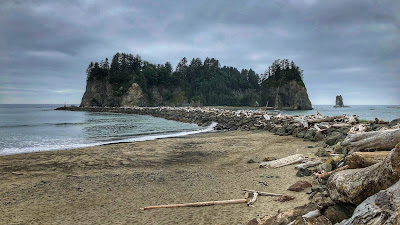 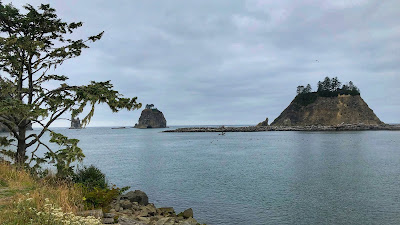 Margaret had been driving for several hours, and we both wanted to find a place to camp. We drove through a free U.S. Forest Service campground on Highway 101, but it appeared full and required a Washington State Discover Pass, which neither of us had at the time. So Margaret took a few minutes Googling nearby campgrounds and found a private campground just a few miles from us. We arrived at Allens Bar Campground (Forks, WA) well after sunset; but after registering and paying the fee, we found a nice spot before it was fully dark. We ended up staying for three nights. The fee was very reasonable at only $5.00 per day, and we had a 3 to 4-bar LTE cell signal, as well. Finally! It was temperate, quiet, and the beautiful Hoh River was only 100 yards or so from our site. While at Allens Bar, we prepared several yummy meals, did a lot of reading, took walks to the river, and enjoyed the heck out of the cool weather. Margaret took advantage of that zippy signal and planned more of our trip. Oh, and one morning I got a brief glimpse of a long-tailed weasel just a few feet from the Roadtrek! It was such an excellent value that we returned after our next camping adventure in Olympic National Park. 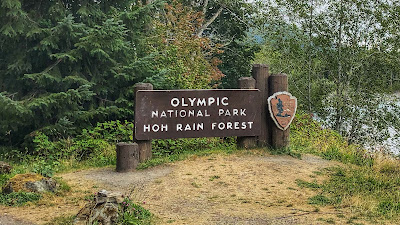 The Hoh Campground is located about 18 miles east of U.S. 101 on Upper Hoh Road. The road was a little rough in places, but it was asphalt all the way. What wasn't all the way was our cell phone signal, which we lost about halfway in. This particular campground in the Hoh Rainforest is first come, first served. We found a wonderful drive-through site (#52 in B Loop) and decided on staying for four nights. We were next to the modern restrooms and potable water and close to a dumpster. Carpenters were at work building showers during our stay. So the campground is not only naturally beautiful, but it has plenty of amenities, as well. 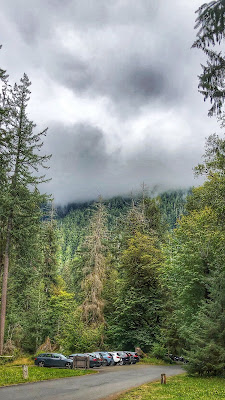 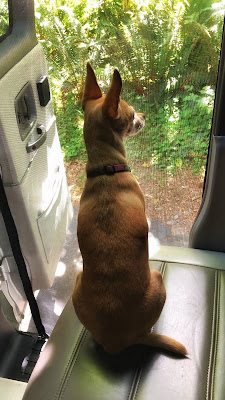 Peaches looking out the screen door at Hoh Campground. Photo by Virginia. 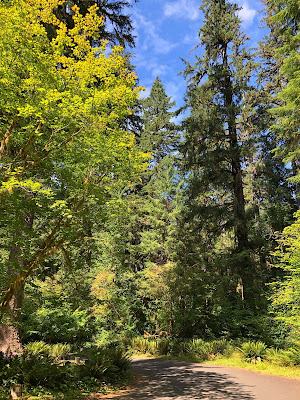 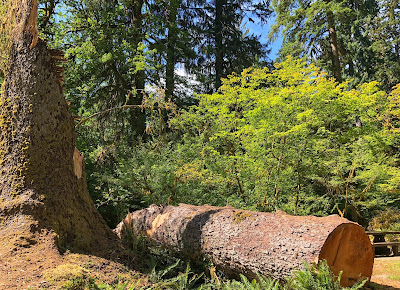 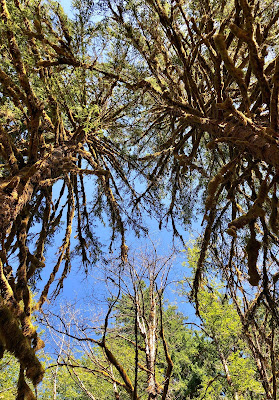 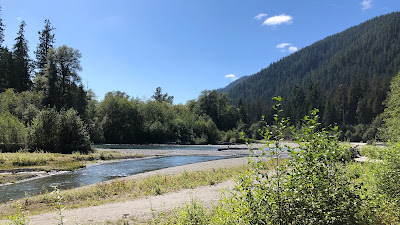 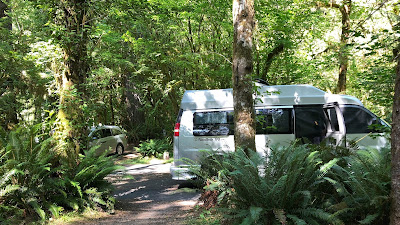 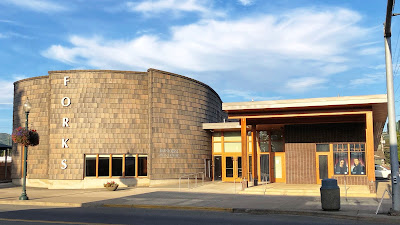 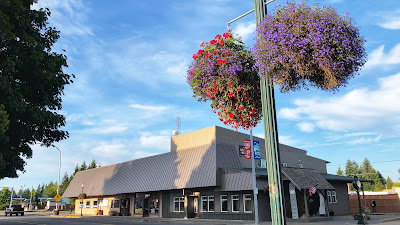 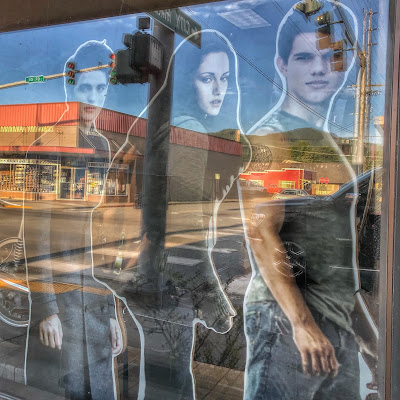 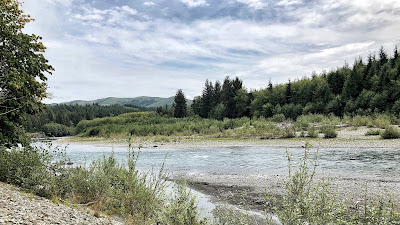 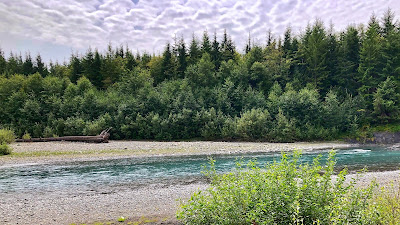 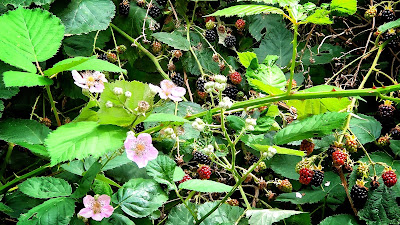 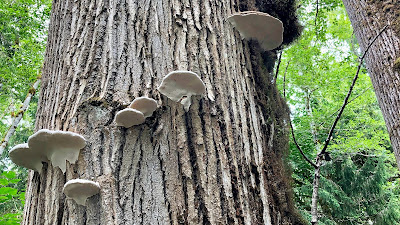 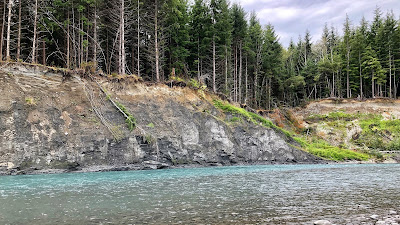 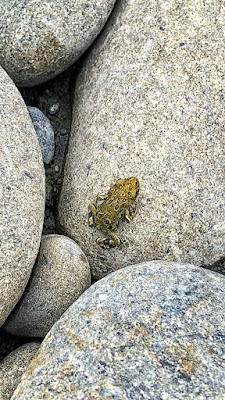 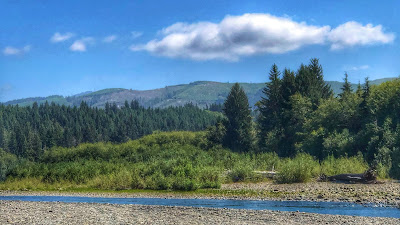 Thank you so much for your patience and for continuing to follow our West Coast States Adventure!

NOTE: Clicking on the photos in the post will open them in a larger view (recommended!). If you want to see more photos of the beautiful places we've shared, we have them in this Flickr Collection: Over the Hill Sisters Photo Collection.
By Virginia Hill at 9:05 AM

Wow, what a beautiful area! It looks so cool and restful. Love the pic of Peaches in the doorway, so cute and alert. I know Forks must have been thrilling for you, Virginia. It's always great to visit places you've read about! Thanks for sharing!

Thank you, Cyn! You are right. It was cool and restful. Being in Forks was a rather surreal experience. I'm glad it came MANY years after the infatuation period. ;)