The first time I laid eyes on Shasta Lake was in the summer of 1977. What I most remember is the huge amount of earth showing that should have been under water. The lake was at the lowest point in its history—nearly 250 feet below its normal depth! Its "full pool" shoreline length of 365 miles was reduced to about 124 miles. Such is definitely not the case now. Shasta Lake is gloriously and amply full! Since October 2018, Shasta Dam has received about 88 inches of rain, which is about 42% more than average. Roughly 90% of the water retained in the reservoir is from rainwater. So, the increased rainfall did its job! 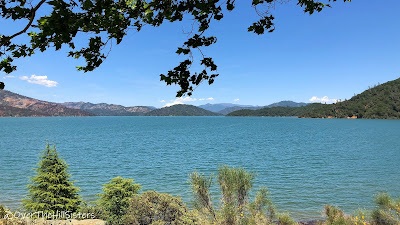 
Our cousins took Margaret and me to see the lake and dam on 17 June 2019. My sister had not seen it up close prior to this day but, rather, saw only glimpses as she was passing by on I-5. On this visit, it was a very clear and temperate day. There was also lots of shade provided by the huge trees surrounding the Bureau of Reclamation's Shasta Dam Visitor Center—all in all, a very pleasant day to take photos.

A negative side effect of the full lake is the driftwood and other debris that is lifted off the shore as the water rises. Shasta Lake. Photo by Virginia. 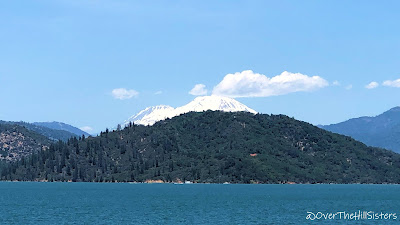 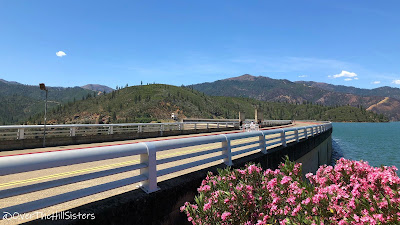 The crest of Shasta Dam with an area of the Shasta-Trinity National Forest (background) that burned in the Carr Fire in July 2018.  Photo by Margaret. 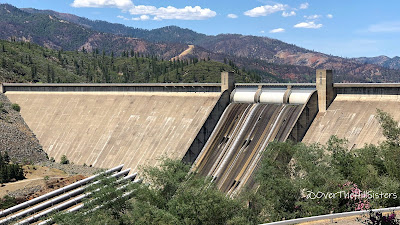 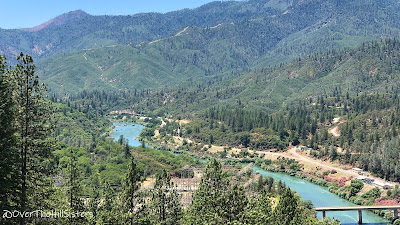 Whiskeytown–Shasta–Trinity National Recreation Area and the Sacramento River southwest of the dam. Photo by Margaret.

We looked at the displays throughout the visitor center and watched a 21-minute version of the documentary, Shasta Dam, California's Empire Builder, which was fascinating! I would very much like to see the 80-minute full-length version of the documentary someday in the future. During a quick walk-through of the gift shop, I bought a postcard for my daughter before going to meet our cousins.

It was a visit that I will hopefully remember more than my previous one. Documenting it here with photos and details should help, I think. :>)

NOTE: Clicking on the photos in the post will open them in a larger view (recommended!). If you want to see more photos of the beautiful places we've shared, we have them in this Flickr Collection: Over the Hill Sisters Photo Collection.
By Virginia Hill at 4:53 PM

Looks very beautiful! BTW your site is not showing properly. Lots of white space and no sidebars or anything.

It was very beautiful, Cyn! Hmmm, you were probably viewing from your computer. What browser? It was fine using Firefox on my PC and looks fine on Safari and Chrome on my iPhone. Margaret says it's fine on her Mac using Firefox. Are other sites not viewing fully for you or just this one? A reboot of your modem and/or router might help. Clearing the history on your browser might help if it continues to be a problem. I'm at a loss. Thanks for the comment! 💗

These pictures are amazing. Doesn't make you just stop and think of how nature and mankind can work together to create such a masterpiece of beauty.

Yes, Mary Jo. In addition to the beauty, this partnership with Shasta Lake and Dam is especially fruitful: drinking water, recreation, and clean, renewable electricity. Virginia and I are great fans of all kinds of bodies of water!

Thanks, Amy! We thought so, too.

I lived in Sacramento still in 77, and we visited that area a lot. Just think, little 8-year-old me might have been there at the same time as you!

In a small world scenario that I have experienced several times, it would totally be possible for 18-year-old me to have been there at the exact_same_time as adorable 8-year-old you, Polli! We can imagine it DID happen if'n it makes us happy to think so!