I think the place Margaret and I both had on the top of our "places to visit wish lists" while here in Redding (California) was Burney Falls. Margaret had planned to visit there after the stay with our cousins was over, but our thoughtful cousins offered to take us themselves to McArthur-Burney Falls Memorial State Park. They've lived up in this area for many years, and John knows where everything is. It was just a hop, skip, and a jump from their home to the falls in their quiet, smooth, and cool car. We stopped briefly at the Burney Mountain Vista Point which overlooks a lush valley with Burney Creek winding through it. The backdrop was Burney Mountain, with Lassen Peak in the distance. It was quite the view!

Decades ago, I lived in Shasta County for several years; and for some reason, I never made it to Burney Falls. Even as a young person, I appreciated the natural beauty and sought it out; but I truly feel I have a greater appreciation for the falls now, as a senior. They are astonishingly beautiful and most definitely worth waiting for! It was about 85° F at the Falls Overlook the afternoon we visited—pretty warm for us. Margaret and I first thought to view the falls strictly from the overlook, but we ultimately decided to walk down the Falls Loop Trail to get up close. The stroll down wasn't the issue, of course. It was the return trip up in the heat we were both taking issue with. However, as anyone who has been at the base of the falls knows, it is much cooler down there in the mist—maybe 20 degrees cooler! 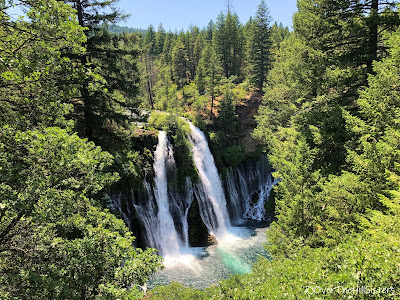 At a height of 129 feet (or 114 feet, according to the World Waterfall Database), Burney Falls isn't the tallest or largest waterfall in California; but it just might be the most beautiful. The hundreds of springs that seep out of the cliffs create a wall of falls some 250 feet wide! The water from those springs appears almost... lace-like. (Zoom in on the photos to see for yourself.) 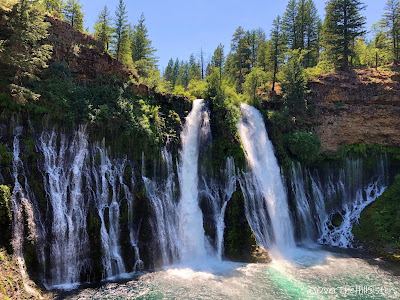 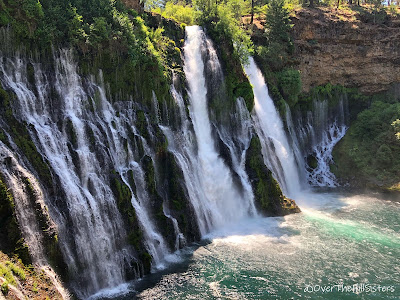 Burney Falls from the Falls Loop Trail. The water empties into Burney Creek at the distant right. Photo by Margaret.

Margaret and I hadn't planned to leave our cousins (who were seated in the shade near the Falls Overlook) for as long as we did. We spent only a few minutes near the base of the falls before walking the loop trail beside Burney Creek down to Rainbow Bridge. After just a few minutes there, we decided it would be a quicker route back to them if we turned around rather than proceed further on the loop. It was on the way back that Margaret tripped and fell on uneven rock steps. I had walked ahead about twenty feet before I realized she wasn't right behind me. When I glanced behind, I immediately saw her on the ground but also noticed several young people helping her. A young man helped her up, and a young woman offered up first aid from her small kit. How kind they were! With a bandage and antibiotic cream covering the scrape on her elbow (she also had a scrape on her knee hidden by her dress), and after many thanks to those who came to her aid, she and I walked off arm-in-arm, stopping to sit on shady benches every so often to cool off and catch our breaths. John and Annette had moved the car into a shady spot, and John came looking for us at the top of the trail as we returned. It was ever so nice getting into their air-conditioned car and drinking the icy water from our Yetis. They took us for a quick sightseeing drive through the park and campground area before briefly stopping to show us Burney Lake. Then we were on the way back to our home on wheels—the Roadtrek—which is "vacationing" in our cousins' side yard. Thank you, Cousins! 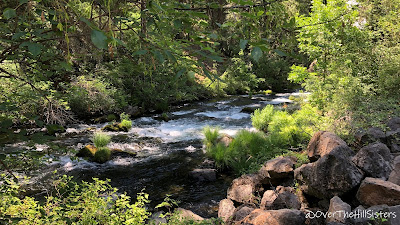 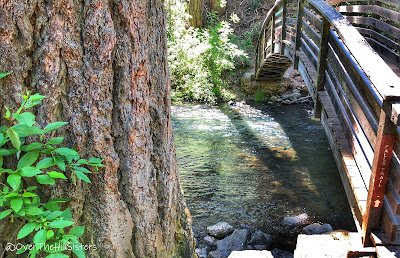 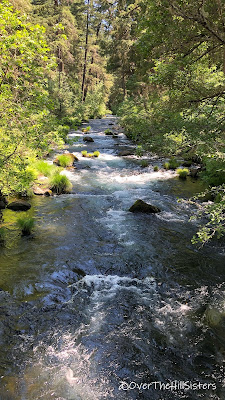 
Burney Falls and Creek. Movie by Virginia.
[If you have trouble viewing this embedded movie, you may view it directly on YouTube here: https://youtu.be/JDDqPj9TGvI]
Our cousins took us to another place on our list just two days later. It was yet another day filled with appreciation and awe!

NOTE: Clicking on the photos in the post will open them in a larger view (recommended!). If you want to see more photos of the beautiful places we've shared, we have them in this Flickr Collection: Over the Hill Sisters Photo Collection.
By Virginia Hill at 8:50 AM

What an amazing place! I'm glad you're getting to see these places!

Amazing pictures thanks for sharing I love waterfalls they are so soothing to my spirt.

That is an AWESOME view! And sharing it with family as well, extra bonus.

Oh my goodness, absolutely stunning! I've heard about Burney Falls in a few of the books I've read from people hiking the PCT--they often take side trips just to see this beautiful place. Oh how I would love to see this someday! So sorry to hear about Margaret's tumble though! Thank goodness she was not hurt badly, and yay for those kind souls who helped!

Awesome falls! Sorry Maggie got hurt, very glad it wasn’t more serious. Seems like you two are having a blast.

Thank you, Amy! We feel very fortunate to have had the chance to experience Burney Falls, as well as the rest of this amazing adventure.

We love waterfalls, too, Mary Jo! This one was especially magnificent.

Awesome, indeed. I wish you could have felt Burney’s thunder and cool mist, too. Thank you for sharing, Roberta! I hope your family enjoys it, as well.

Burney Falls is certainly worth any side trip to see! Unfortunately, the full experience can't be shared adequately with photographs, videos, and words. Therefore, I hope you will be able to go there yourself someday. I should have had my walking stick with me; it's especially helpful when I walk on uneven surfaces. I have been so blessed with how kind and helpful total strangers have been with me!

Thanks, Johnny! Just a minor correction, though. There is no, ahem, "Maggie" component to the Over the Hill Sisters. ;-) However, Virginia and I (Margaret) do appreciate your comment!