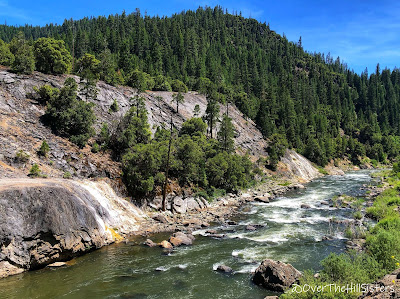 The next sight that had us pulling off the highway to investigate was Lake Almanor (CA), a large reservoir in northwestern Plumas County, but with much of its southern shore in the Lassen National Forest. We walked down to a cove where families were picnicking and cooling off in the water—nice but noisy on that Sunday afternoon. It was just a quick stop, so on we went.

Indian Creek, Lake Almanor, & Potato Patch Campground. Movie by Virginia.
[If you have trouble viewing this embedded movie, you may view it directly on YouTube here: https://youtu.be/v91g4arRT9I]
After leaving Highway 89 to travel west on Highway 36, we caught a quick glimpse of Lassen Peak (photo in the video above), near the town of Chester, CA. Then before too long, we turned onto State Route 32, which is where our next campground was located. Yippee, the highway and surrounding forest were really pretty! I could tell because we were arriving early enough this time to actually see everything!

When we arrived at Potato Patch Campground, we saw the perfect campsite; but there was a truck parked in it. Darn! We drove through the campground (which has 32 designated campsites) but didn't see another one we liked as much. Imagine our delight when we again drove around the loop a few minutes later and saw that the truck was gone! I checked the registration stub on the campsite post; and woo-hoo, he had only paid for one day. Boom! Margaret backed the Roadtrek in lickety-split. Talk about perfect timing! 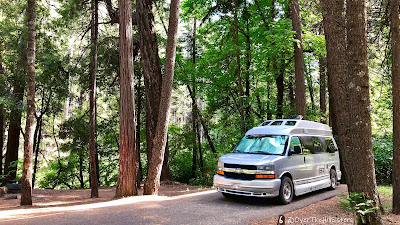 The Roadtrek in campsite 6. Deer Creek is beyond the trees at the left. Photo by Margaret. 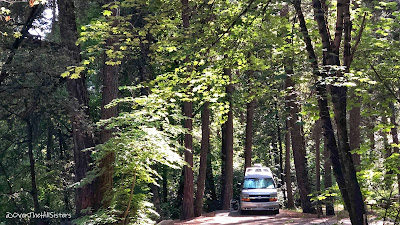 The Roadtrek under the towering trees. Photo by Margaret.

You can see how ideal the campsite was. We were accustomed to having creeks and lakes nearby, but having potable water in a campground? It has been a bit of a rarity for us. Icy cold mountain water came out of a spigot right in our campsite...yes! Then there were the towering pine and fir trees, the vault toilets, the trash, and recycling. Oh, and there was the creek just a few feet away. Yes, a creek! Deer Creek (CA) had a nice little fall and boulders that upped the rushing water sound right next to our campsite. I love that sound; don't you? There was another thing about this campground that we were sadly getting entirely too used to no cell phone signal. Zip! Nada! However, according to information on the campground bulletin board, there was a pay phone a few miles away.... 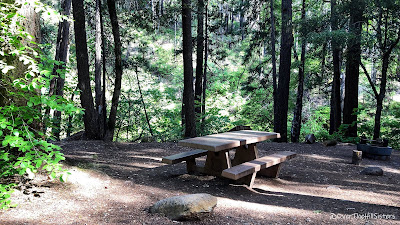 Our Potato Patch campsite #6. Deer Creek is just beyond the trees. Photo by Virginia. 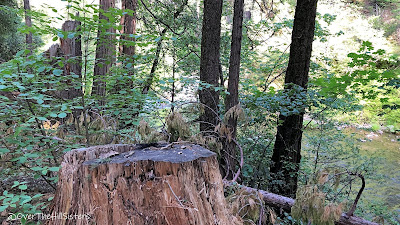 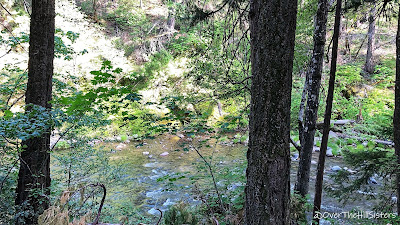 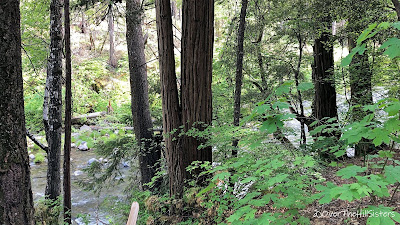 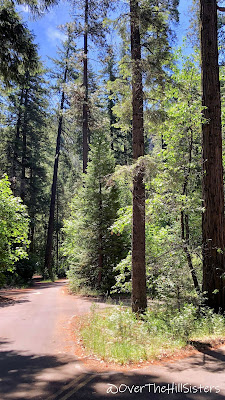 The campground entrance. Photo by Virginia.

It was such a quiet and pretty location, we decided to stay for four nights. We had been up in the higher elevations (closer to 7,000 ft.) and were now at 3,400 ft., and it felt like it. It was in the 80s during the day and down only into the 60s at night. The insects were out in minor force, so I had to retreat inside around noon each day.

Something happened while we were camping here that kind of took the happy away, though. Margaret started feeling very ill and in a lot of pain on the day after our arrival. Man, she was miserable. She stayed in bed, didn't want to eat, and experienced severe nausea and vomiting, along with agonizing pain. I asked if she wanted me to take her to an emergency room; but she had experienced similar symptoms a year ago and declined, saying she would go to an urgent care facility if she felt she needed to. She rested; and I kept busy with little chores like filling our drinking water, emptying the trash, sweeping out the Roadtrek, checking on her, and walking Peaches. I walked around the campground (smiling and waving at the friendly campers), read six books, edited photos, and made a movie or two—all the while waiting for Margaret to feel better. Fortunately, she started improving a bit and was able to eat a little something late on our third day there.

Our scheduled departure date arrived, and Margaret decided she was well enough to drive. Our next planned stop wasn't a campground, though. Oh, no. Rather, we were going visiting! We were going to stay with a first cousin once removed and her husband in Redding, CA. We used to visit them fairly often when we were children, but the last time we had seen them was in 1986! =:>)

Civilization. Conversation. Conveniences. Heat. It's all here! Wi-Fi, too. Yes!


NOTE: Clicking on the photos in the post will open them in a larger view (recommended!). If you want to see more photos of the beautiful places we've shared, we have them in this Flickr Collection: Over the Hill Sisters Photo Collection.
By Virginia Hill at 4:04 PM

So glad Margaret is feeling better. What a beautiful campground! V, I can just see you walking and admiring all the sights and sounds of nature - especially that lovely creek. Thanks again for sharing your travels with us!

What an absolutely gorgeous campsite--I'll bet you wanted to just stay there forever! Looks so cool and relaxing and perfect. But I'm so sorry Margaret got sick! That's obviously never any fun for anybody and I'm SO glad to hear that she got better without having to go to a doctor. Can't wait to read your next entry!

Thank YOU for your friendship and support, Roberta! It was a very forest-y campground, and so very different from what we're used to. I wish Margaret had been able to enjoy her stay there, but we're headed back up to the mountains soon. Woo hoo!

Thank you dear friend! You know, I thought of you while we were there, Cyn. The trees and creek, and how you love water. Well, we'll be driving down the coast of three states with a view of the Pacific most of the way. I will be thinking of you even MORE then. I hope you can get rejuvenated in your favorite spot on the coast again very soon.