After leaving our nephew and his family on Lopez Island, we took the ferry back to Anacortes, WA, and filled up the nearly empty propane tank. Margaret and I both wanted to spend some time on Whidbey Island and were pleased when we drove over Deception Pass Bridge at about noon on 05 Aug 2019. We pulled over and walked on and under the bridge, seeing it from nearly every angle. It was a gloriously cool and clear day, which made for lots of photo ops. 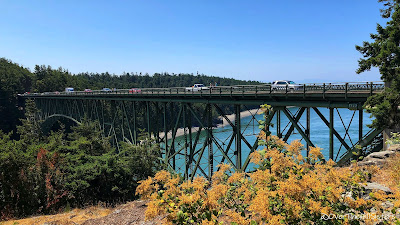 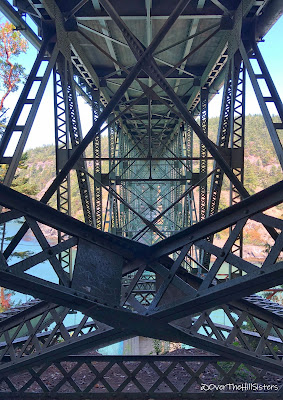 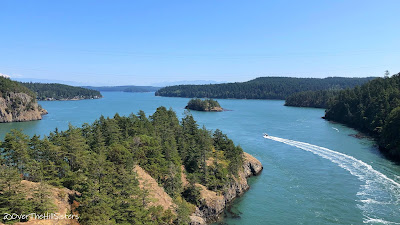 Deception Pass State Park and Fort Ebey State Park Campgrounds were full, but one of the employees suggested Rhododendron County Park. Fortunately, we found a nice campsite there, and Margaret paid for six nights. The campground had vault toilets, fresh water, picnic tables, and fire rings. The daily fee was $15. We also had two bars LTE and were able to keep up with things online! It was located only about 1-1/2 miles from the town of Coupeville, at whose library we spent two very long days utilizing their public Wi-Fi. (Practical Magic, one of my all-time favorite movies, was filmed partly in Coupeville, which I found very cool!) After each day at the library, we did some shopping in Oak Harbor before returning to our campsite. We found someone occupying our campsite after our second day away, but we clearly had our receipt posted showing we had two days left (and I had taken a photo of it before leaving for the day). They had left a few items on the picnic table but acknowledged that it was still our campsite before leaving to find another. They said the ranger had told them if there is nothing left behind at the campsite that it's likely the previous campers had left early. HAH! We are in a van and not a tent. We left the receipt. Margaret and I were both relieved that they didn't get unpleasant about it all, though. 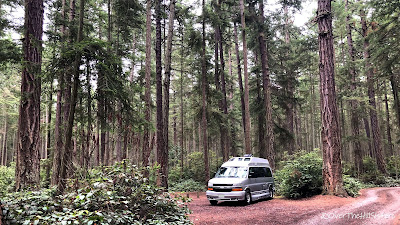 The Roadtrek in our campsite at Rhododendron County Park. Photo by Virginia.

After our six nights on Whidbey Island, we took the ferry to Port Townsend on the Olympic Peninsula. It was a short (about 35 minutes) and a smooth ride. We checked Fort Worden Historical State Park first, and the sign clearly said "Campground Full." Just a few minutes away at the beautiful Fort Townsend Historical State Park, we found several "tent sites" available on the western (forest) side of the campground and chose a really nice private site. The forested tent sites were much nicer than the RV sites. There were no hookups on either side, anyway. One of the advantages of traveling in a smaller RV like the Roadtrek (20 ft.) is that it can be parked in nearly any campsite or parking space. 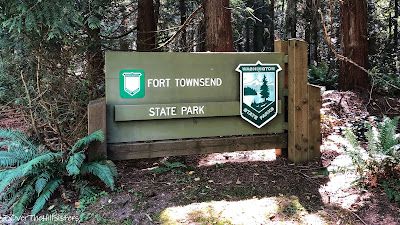 Our usual routine is to locate an available campsite; and while Margaret walks Peaches to pay the fee at the iron ranger or to a live person, I set up the Roadtrek to camp. I had just finished when Margaret called saying the site we had chosen was only available for one night. She was able to find another site where she could pay for the night and reserve the same site for three more nights. This campground ended up being the most complicated and expensive of our trip to date ($123 for four nights!). However, I absolutely loved it! We were parked right next to the restrooms and showers, we had fresh water in our campsite, there was a dumpster nearby, we had a fairly strong cell phone signal, and it was comfortably cool. 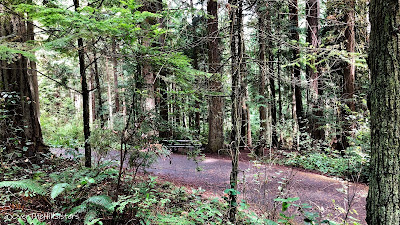 The Douglas Fir, Western Hemlock, and Northern White Cedar trees were stunning and aromatic. I sat outside among them during the day and looked at them through the window above my bed at night. I'm not sure of the exact reason that these particular trees fascinated me more than those in the other forests we'd camped in but they definitely did. I celebrated my 60th birthday among them and hope the sense of appreciation and serenity I felt stays with me for a long time. 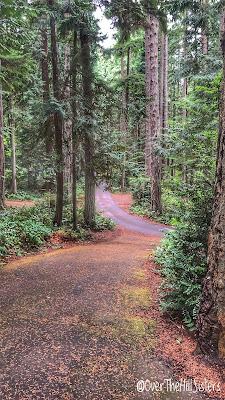 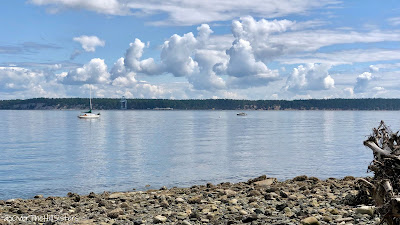 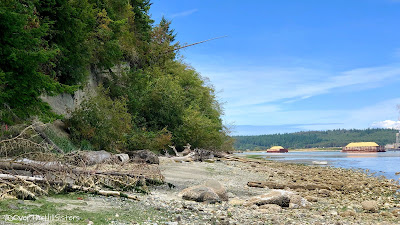 On the morning of the 13th, we drove to the Port Townsend Historic District and parked. We walked east on Water Street to Point Hudson and had a delicious late lunch there at the Shanghai Restaurant. We then walked west on the other side of Water Street, enjoying the cooler temperatures near Port Townsend Bay. Most of the buildings seemed to have been built in the 1880s to '90s. Several of them were being refurbished. The car and foot traffic was plentiful; and other than being a little too warm for us, it was a really lovely day. 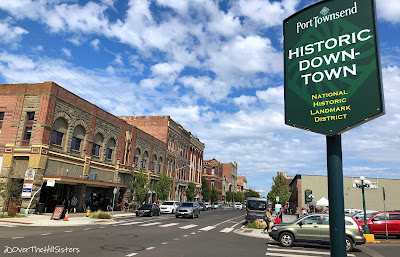 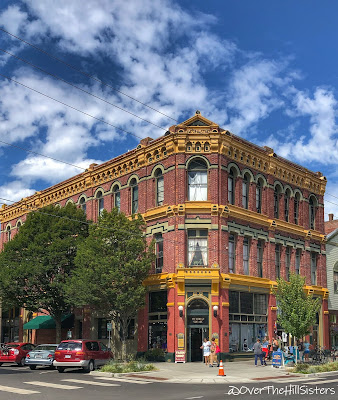 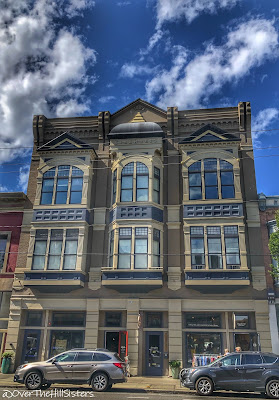 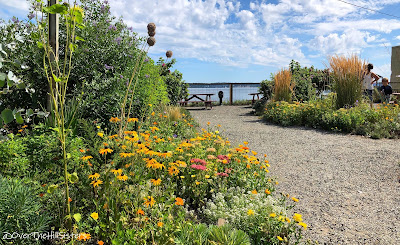 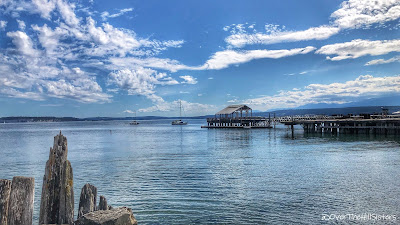 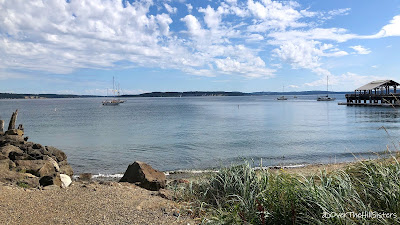 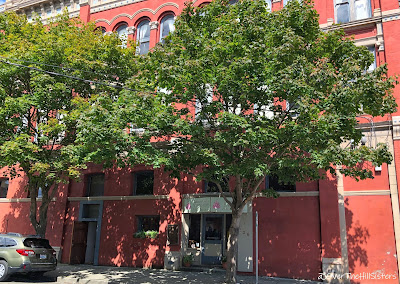 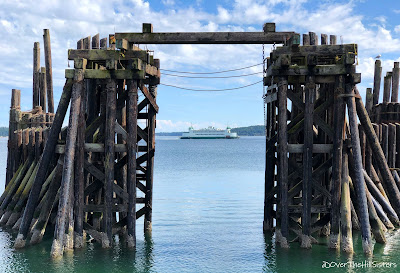 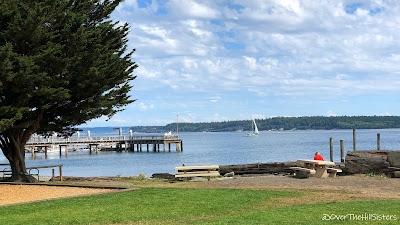 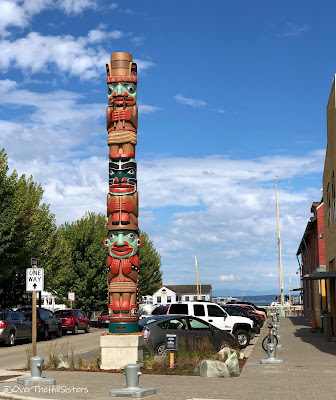 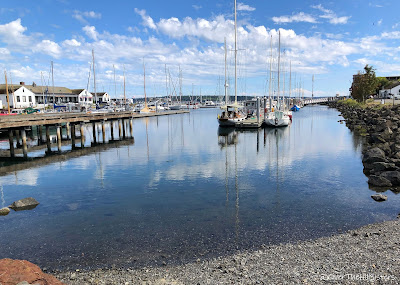 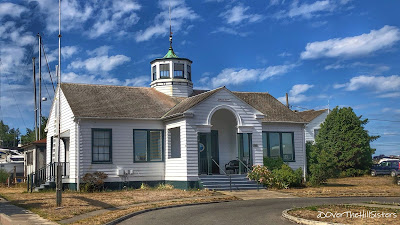 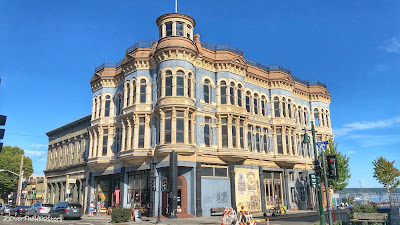 We left Fort Townsend State Park Campground at 11:00 A.M. on 15 August. We had a lovely camping experience and a day of sightseeing there on the northern Olympic Peninsula. It was cool, gorgeous, and had an interesting history. I'm not sure of the source, but each morning at 8:00 I heard the Star Spangled Banner playing over a loudspeaker from our campsite. It was faint, but I definitely heard it.

Later that day we arrived in a small town I first heard of in a series of books and movies. I certainly never thought I would ever visit there; but I did, and it was rather surreal for me. Stay tuned and thanks for following our adventures!

NOTE: Clicking on the photos in the post will open them in a larger view (recommended!). If you want to see more photos of the beautiful places we've shared, we have them in this Flickr Collection: Over the Hill Sisters Photo Collection.
By Virginia Hill at 2:14 PM

Wow, this area looks just beautiful, ladies! I'm loving those elegant old buildings in Port Townsend, they're just gorgeous. And your campsites make me pine-tree green with envy! I can just imagine how wonderful it smells in those woods. Siiiiigh! Thanks for sharing such a lovely entry!

Gorgeous photography, both of you! I truly enjoyed this installment of your adventures as these are some of my favorite places. Did you know that ‘An Officer and a Gentleman’ was filmed at Fort Worden?


There are several US Navy activities around the waters there, so the daily hearing of the ‘Star Spangled Banner’ might be due to that. I think they play it with the AM flag raising.

Your fragrant forest campsite was only about 55 miles from me. Granted, it would have taken me 2 ferry rides and 2 1/2 hours to get to you, but I’m still so very disappointed it didn’t work out for me to visit.

I’m quite excited about the next destination’s journal entry!

I'm very glad you are enjoying virtually visiting these lovely locations with us, Cyn! Thank you VERY much for following and for your wonderful comments.

Thank you for your lovely comment, Paula! You know, I hadn't remembered EXACTLY where An Officer and a Gentleman had been filmed, but when I watched it right before we left for our trip I looked it up and noticed it filmed in and around Port Townsend! I am disappointed we weren't able to get together while we were in YOUR neck of the woods, but maybe we'll have another chance some day.