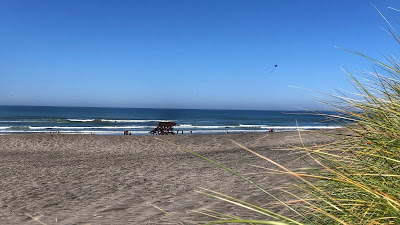 It was a rather warm (83°F), windy, and clear day. The beach, although not hugely crowded, was more crowded than either of us prefers. 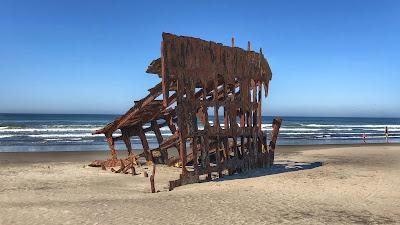 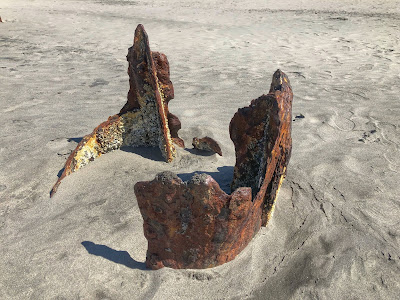 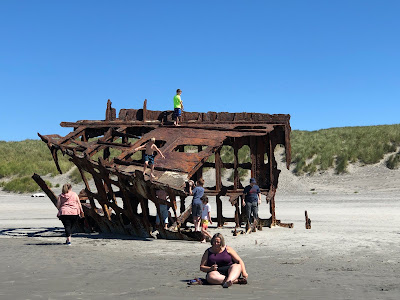 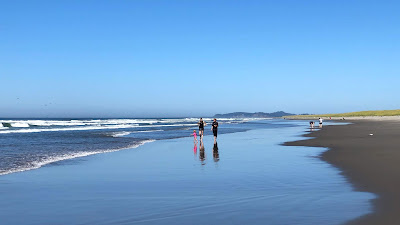 After our visit to the beach, we headed to Fort Clatsop in the Lewis and Clark National Historical Park. Margaret and I had visited Fort Clatsop once before (in November 1995) shortly after I had moved to Oregon. The weather during each of these visits could have hardly been more different. During that first visit, the temperatures were probably in the 40s, and it was raining on and off quite hard. On this last visit, it was 85°F with bright, hot sunlight. Even though it was definitely too hot for us, we enjoyed our few hours there. 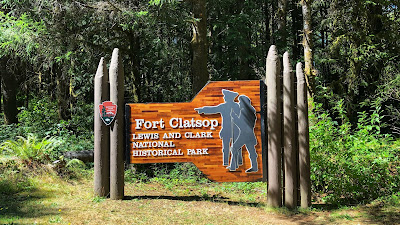 We spent time looking at the exhibits in the visitor center, which is beautifully maintained and amply staffed. 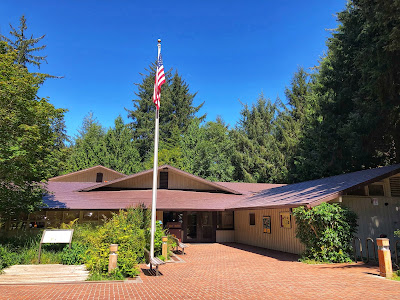 After the visitor center, we walked the nearby trail, which was largely shaded and had several points of interest, including this bronze statue of Sacagawea (sah-CAH-gah-we-ah) and her baby. 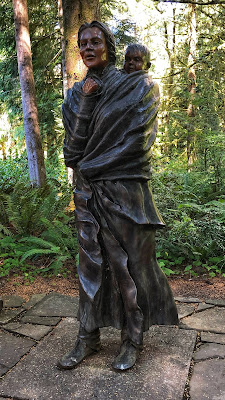 The original fort was the winter encampment site of the Corps of Discovery from December 1805 to March 1806. By the 1850s, the original fort had gradually deteriorated and parts of it were removed until there were no surface traces remaining. A reconstruction of the fort was completed in 1955, but that replica was destroyed by fire in 2005. The current replacement was built in 2006. 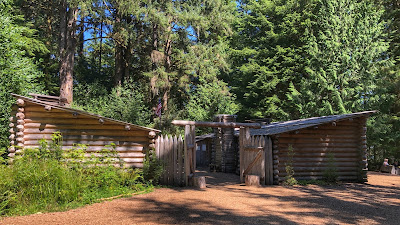 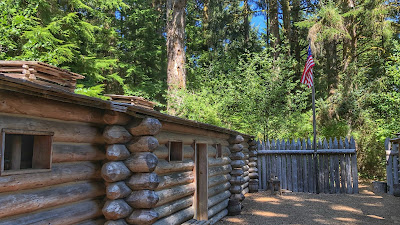 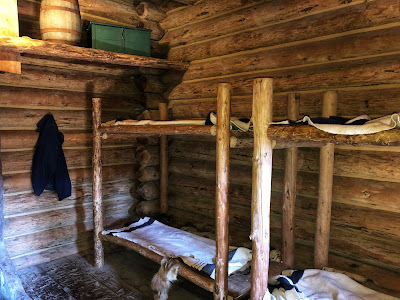 We were fortunate enough to have arrived in time to watch a reenactment that recounted the history of the Corps of Discovery and demonstrated how to load and fire a musket. 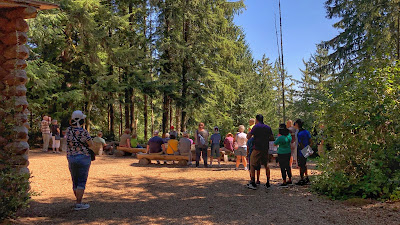 A reenactment at Fort Clatsop.

We walked behind a ranger-led group, which began on the Fort to Sea Trail; but because the sea is seven miles away in a westerly direction, we detoured south to the South Slough Trail and returned to the fort via the Netul River Trail. 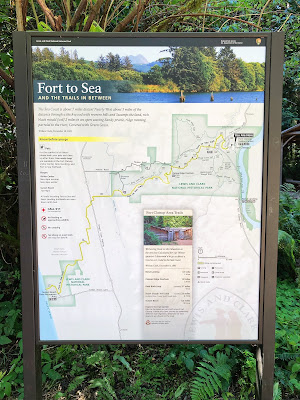 A trail sign at Lewis and Clark Historical State Park. 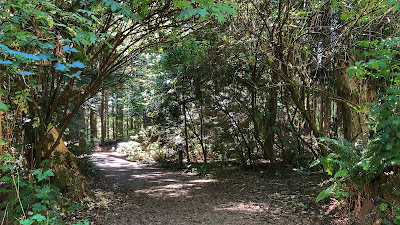 The beginning of the Fort to Sea Trail at Lewis and Clark Historical State Park. 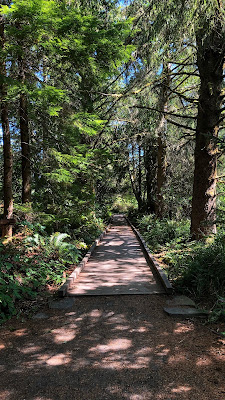 A wooden walkway on the Fort to Sea Trail at Lewis and Clark Historical State Park. 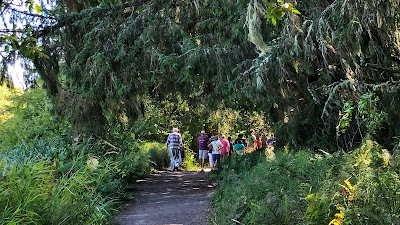 A guide-led group on a trail at Lewis and Clark Historical State Park. 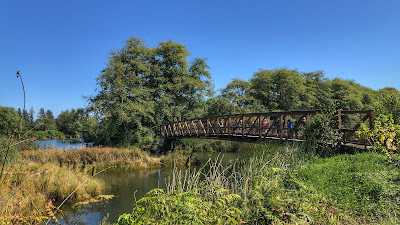 I believe this bridge was on the South Slough Trail at Lewis and Clark Historical State Park. 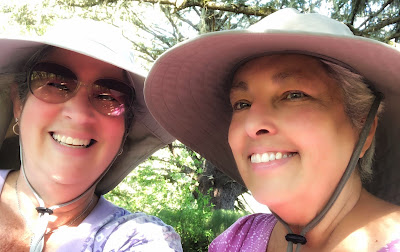 Virginia and Margaret on a trail at Lewis and Clark Historical State Park.

After two hours of walking the trails, we were happy to freshen up at the visitor center before returning to Peaches and the Roadtrek, which was parked in the shade with the Maxx Air Fan going to keep her cool.

The next morning we took showers and filled the freshwater tank. As we were leaving the RV park, we were stopped by a young woman who was curious about us and the Roadtrek after watching a video about an RV nomad woman in her Roadtrek posted by Cheap RV Living. We talked for a few minutes, and we gave her one of our "business" cards before saying our goodbyes.

We needed to pick up a few things, so we stopped at the Walmart in Warrenton, OR. On one of the aisles, we saw the woman we had just spoken to at the RV park. She saw us and laughingly said, “Didn’t I just see you two a little while ago?” It turns out she worked at Walmart. What a coincidence!

We continued south on U.S. Highway 101, stopping frequently at viewpoints and turnouts to take photographs. We noticed several "Campground Full" signs that became concerning when we started looking for someplace to camp that night, the Wednesday before Labor Day weekend. Yikes! We were feeling pretty desperate by the time we came upon Barview Jetty County Campground in Tillamook County which was purportedly full. It was late and getting dark, so Margaret tried to squeak us into it, anyway. Lucky for us, it turned out that there were two small, non-reservable sites available. We were quite relieved to be able to have a campsite for five nights to get us through the busy Labor Day weekend coming up. Hooray!

We were quite busy and had a lot to see in Tillamook County. Stay tuned for that entry, and thanks for reading!

NOTE: Clicking on the photos in the post will open them in a larger view (recommended!). If you want to see more photos of the beautiful places we've shared, we have them in this Flickr Collection: Over the Hill Sisters Photo Collection.
By Virginia Hill at 2:10 PM

Great pictures. I love the one of you and Margaret I don't remember reading this when you first made this trip.

Thanks for your comment, Mary Jo! If you are referring to our first visit to this area--that was in 1995. We were barely online then. In fact, you and I (and the rest of the Loop Ladies) hadn't even "met" yet. That came about six months later. :)