It was 02 September 2019 when we left Barview Jetty County Campground after five nights. We were both looking forward to peace, quiet, and a more natural camping experience. Margaret had Nehalem Falls Campground in mind; so we left the coast and headed up into the mountains of Tillamook State Forest where we were fortunate to find several open campsites (there are only 20), vault toilets, trash, recycling, and potable water (hand pump). What there wasn't was a cell phone signal, per usual. The fee was $20 a night, and we stayed for two nights. 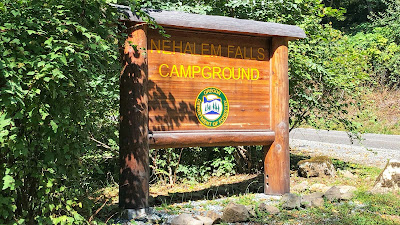 Although it was 75 degrees when we arrived, shade was everywhere, and I was quite comfortable sitting in it to read. The old-growth trees were a beautiful mix of cedar, spruce, hemlock, and Douglas fir. Our campsite was flat, well-graveled, and fairly private. 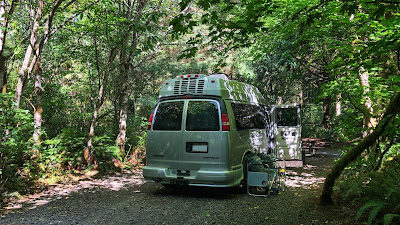 The Roadtrek in campsite #9 at Nehalem Falls Campground. Photo by Virginia.

During our two-night stay, I saw Stellar's Jays, robins, red squirrels, and chipmunks. The next morning's quiet was interrupted by a camping couple screaming and cursing at each other very loudly and for quite a long time. Fortunately, they settled down when another camper yelled, "Hey, I'm trying to camp over here!" They left soon after. Whew!

The campground was already very well kept; and that morning a group of Oregon Department of Forestry employees came to clean the fire pits, vault toilets, and to pick up around the campsites. 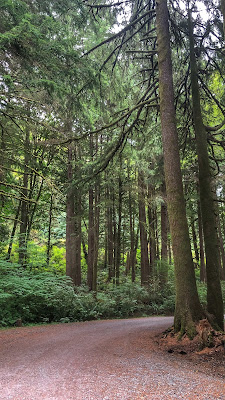 Later that morning Margaret, Peaches, and I took to the narrow, and sometimes intimidating, loop trail through the forest to the Nehalem River. 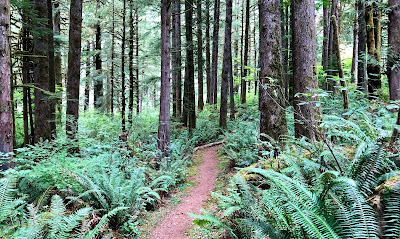 The trail loop at Nehalem Falls Campground. Photo by Margaret.

It was a lovely hike. However, in one location, we had to walk past a tree buzzing with bees; and on the other end, we decided against continuing right next to another tree with scads of hornets hovering. There were also wash-outs, lots of tree roots, and large rocks on the trail. 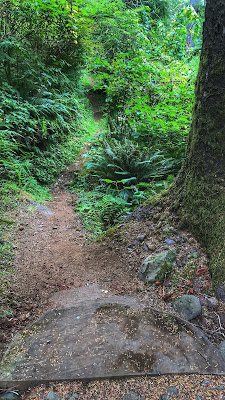 The trail loop at Nehalem Falls Campground. Photo by Virginia. 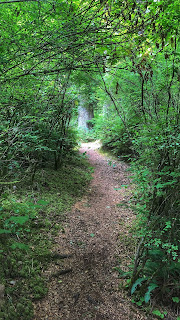 The trail loop at Nehalem Falls Campground. Photo by Virginia.

After walking a bit, we got our first glance of the Nehalem River through the trees. 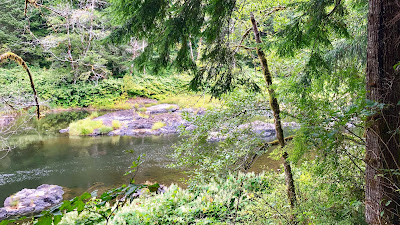 The temperature was probably in the high 60s; and the sky was gray, which cast a pall over the verdant area and beauty of the river—particularly for photographs. 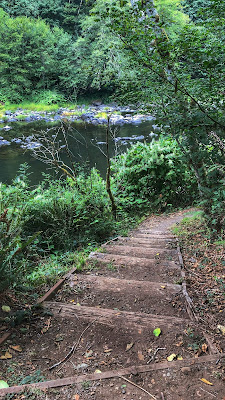 Steps leading down to the Nehalem River. Photo by Virginia. 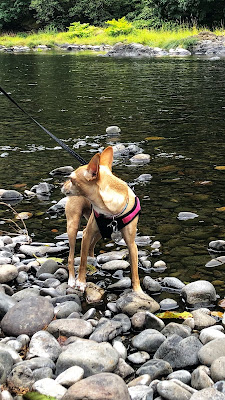 Peaches, barely in the Nehalem River. Photo by Virginia. 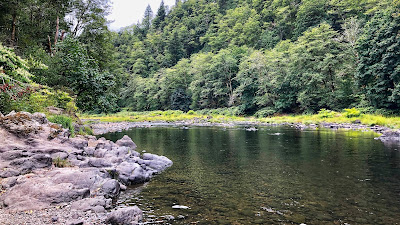 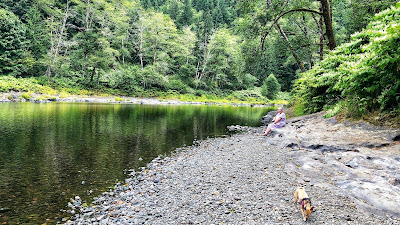 Peaches on the shore of the Nehalem River. Photo by Margaret. 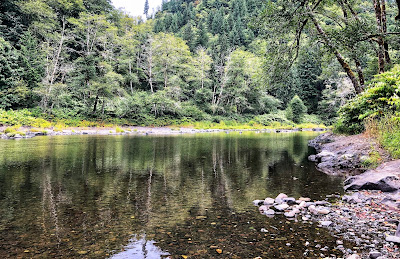 The one-mile trail looped back to the campground where we encountered the cute lumber shed below. The one thing we didn't see too well (because of the aforementioned hornets) was Nehalem Falls. We got glimpses of them through the trees; they are low falls and actually more like rapids. 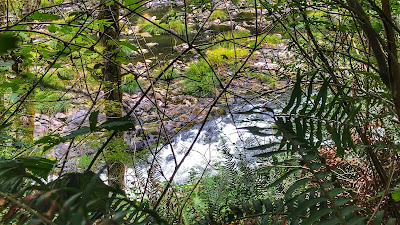 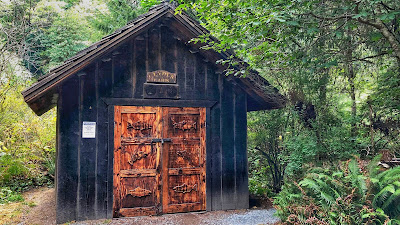 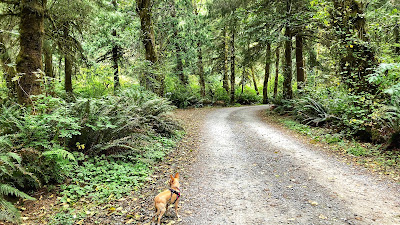 Peaches out for a walk in Nehalem Falls Campground. Photo by Margaret.

Nehalem Falls Campground is open from May to September. We made it by less than two weeks! 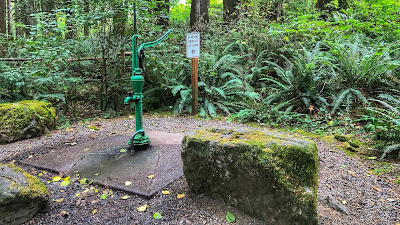 We left this pretty campground on the morning of 04 September and drove to a cute coastal town I had enjoyed visiting several times when I lived in Oregon back in the '90s. Afterward, we spent a little time at the place that introduced me to the name Tillamook. Those locations will be featured in our next entry. Thanks for reading!

NOTE: Clicking on the photos in the post will open them in a larger view (recommended!). If you want to see more photos of the beautiful places we've shared, we have them in this Flickr Collection: Over the Hill Sisters Photo Collection.
By Virginia Hill at 2:32 PM