We left Nehalem Falls Campground and headed to the Oregon coastal town of Cannon Beach on 04 September. I had visited this tourist town several times during the year-and-a-half I lived in Oregon in the late 1990s. It offered a very pleasant pedestrian shopping experience; and the beach, with its natural tide pools, was vastly different from those I had taken in prior to it.

In the twenty-two years since I last spent time there, it felt much larger and considerably busier—especially for a weekday following Labor Day weekend. We lucked out and found a parking spot on the main drag. The weather was a very pleasant 70°F; but it was quite overcast, which made for a lot of glare. Margaret and I strolled up and down Hemlock Street, stopping in Cannon Beach Bakery for some goodies and being awestruck by the photographic talents of Randall J. Hodges in his Images of the West gallery.

Cannon Beach is a charming and well-maintained little town brightened by planters of colorful flowers and sporting an abundance of art galleries, boutiques, restaurants, and other specialty stores to enjoy. 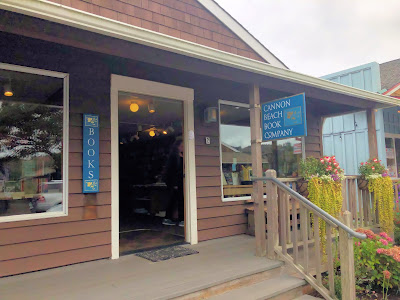 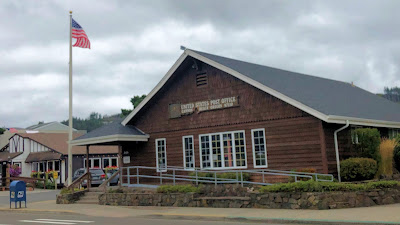 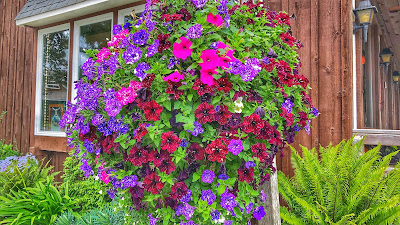 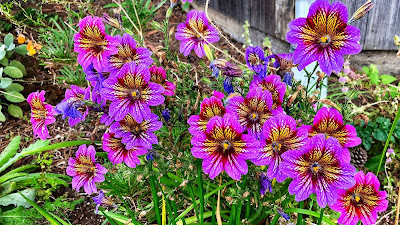 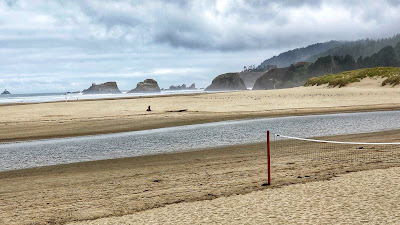 Ecola Creek and the Pacific Ocean at Cannon Beach. Photo by Margaret. 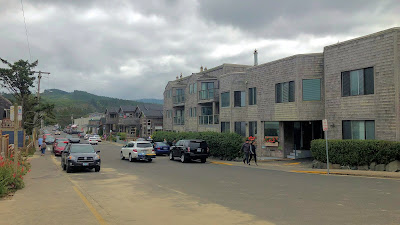 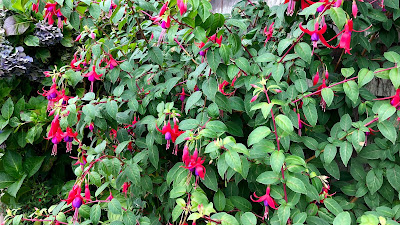 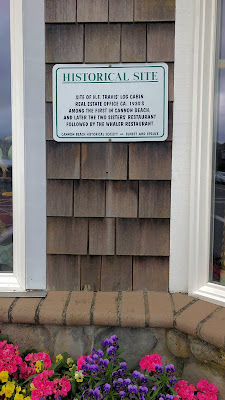 The exterior of a shop on West 2nd Street. Photo by Virginia. 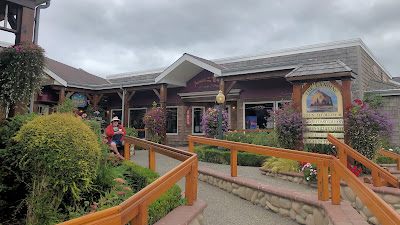 The Landing courtyard complex on Hemlock Street. Photo by Virginia. 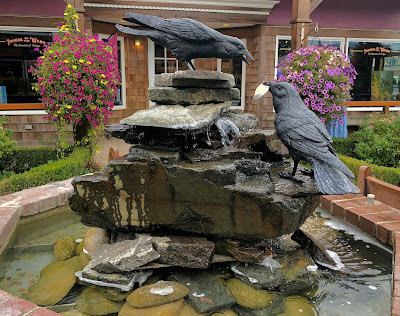 The fountain at The Landing on Hemlock Street. Photo by Virginia. 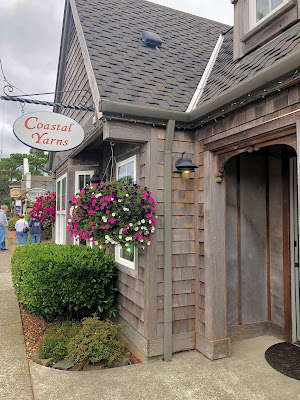 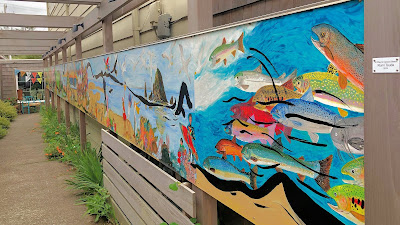 The mural At Play in Cannon Beach by artist, Rumi Tsuda. Photo by Virginia. 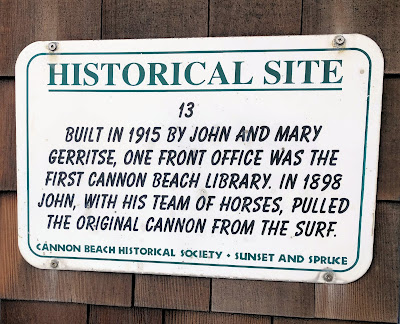 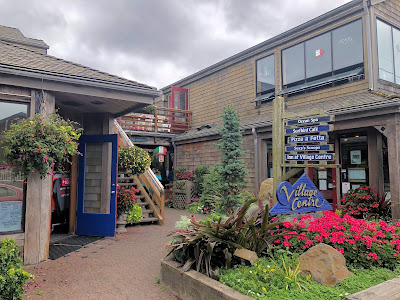 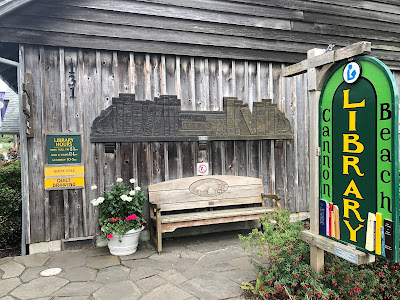 The exterior of the Cannon Beach Library on Hemlock Street. Photo by Virginia. 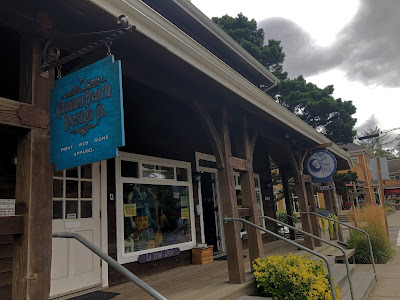 After about an hour-and-a-half in town, we drove south, hoping for a photo op with the famous Haystack Rock. However, Margaret and I weren't able to find a large enough parking space for the 20-foot Roadtrek in the crowded public parking areas, which meant leaving without visiting the famous natural landmark. We were, however, blessed with plenty of other gorgeous scenery on the way to our next destination. 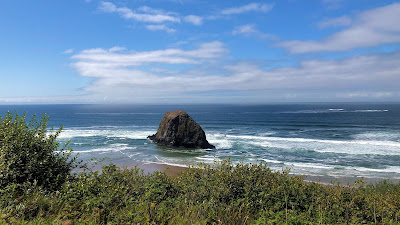 An offshore rock south of Cannon Beach. Photo by Virginia. 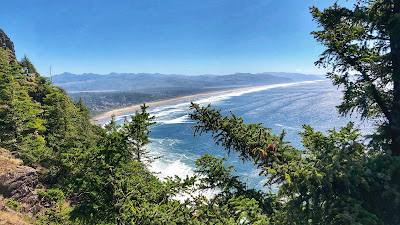 An overlook in Oswald West State Park. Photo by Margaret.

Prior to moving to Oregon from Southern California, I was not familiar with the Tillamook Creamery (Are you?); but I was enlightened in short order. Their butter and cheeses were everywhere in Oregon, and I was quite taken with both at that time. Their sharp cheddar cheese was the absolute best!

[Comment by Margaret: Oh, yes, I absolutely loved Tillamook sharp cheddar cheese! Although I have given up cheese for health reasons (high blood cholesterol levels despite eating no cholesterol whatsoever!), I still have fond memories of how lovely a sandwich could taste with the addition of a thick slice of Tillamook sharp cheddar. I didn't care for their ice cream, though; too creamy for me. My favorite "ice cream" now is So Delicious soymilk frozen dessert in a quart size. It is the best frozen dessert they make, and I wish it wasn't so difficult to find! I love its taste and texture; and its nutrition profile is way better than any dairy or non-dairy ice cream I have yet to find. Now, if only they would substitute the cane sugar in it with my favorite natural sugar replacer, Zsweet. Oh, well, a girl can dream.]

Neither Margaret nor I consume dairy products these days, but we still wanted to visit the creamery that produced our favorite cheese ever! 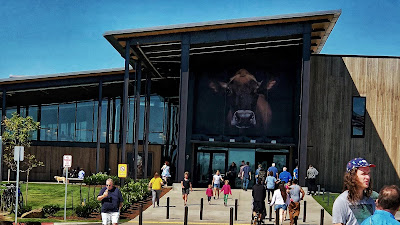 The south entrance to the Tillamook Creamery Visitor Center. Photo by Margaret. 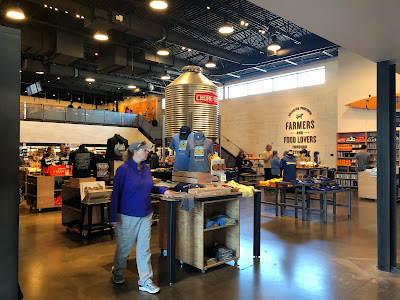 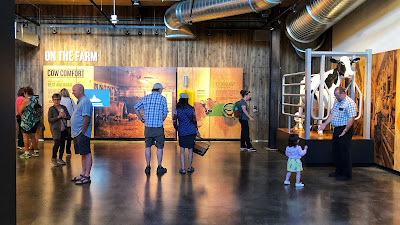 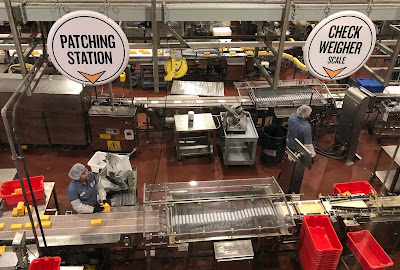 View from the viewing gallery of the Tillamook Creamery factory. Photo by Virginia.

After our self-guided tour of the Tillamook Creamery Visitor Center, we did some grocery shopping before heading to our next overnight campground. We'd had a day filled with crowds and were looking forward to a quiet evening to recoup, which we were fortunate to find before nightfall. The next day we visited a location so stunning, that I consider it one of the most gorgeous of our entire trip.

NOTE: Clicking on the photos in the post will open them in a larger view (recommended!). If you want to see more photos of the beautiful places we've shared, we have them in this Flickr Collection: Over the Hill Sisters Photo Collection.
By Virginia Hill at 6:50 PM

Va, you and Margaret take beautiful pictures. The way you both talk about the different places you visited is like I am walking right in your shadows. Both of you ladies should see about selling some of your pictures of states to but in a brochures for the state to have people come and visit them.

Thank you for following and for your thoughtful comments, Mary Jo.