On 11 July 2019 we headed north on State Route 89 to camp near the spectacular Mount Shasta (CA) in the southern Cascade Range of Shasta-Trinity National Forest. When I lived in Shasta County as a teen and young adult, I saw Mount Shasta every day from my home about an hour south. I had seen it numerous times as I drove by on I-5, but I had never gotten as close as I did on this day. It really is such an impressive mountain/volcano. Mount Shasta and its satellite cone, Shastina, are visible from very far away, as it towers about 10,000 feet above its surroundings! 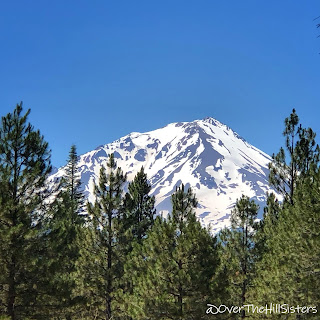 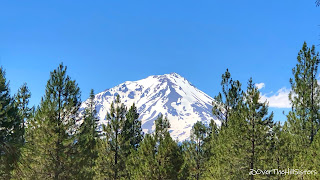 Margaret had hoped to camp at McBride Springs Campground, but all twelve campsites were filled when we arrived. We've been lucky, though, that this was the first time we weren't able to get a campground site without ever making reservations. We drove back toward Mount Shasta City, CA, for a cell signal and checked the Campendium app for alternatives. We decided to try for the highest open area to camp, which is adjacent to the Bunny Flat Trailhead (elevation 6,950 feet) on Everitt Memorial Highway. Bunny Flat dispersed camping isn't truly a campground. With dispersed camping, campers must bring everything needed and pack out all waste. The dirt access road and campsites had the finest and puffiest dirt I think I've ever been in. Margaret, Peaches, and I parked in the lot at the end of the highway and walked in to look for a site that would work for us. The dirt road was rough, rocky, and washed out in places. We found a site not too far in, and I stayed there while Margaret and Peaches went back to the Roadtrek. Margaret was able to maneuver into the spot after considerable effort; but as she was backing onto the leveling ramps, I noticed gasoline dripping from near the generator under the Roadtrek. Yikes! We had seen spots under the generator at Lassen but did not see it actually dripping. So after all the effort and getting our feet filthy (flip-flops!), we decided it was best to try and find out what was going on with the generator. So we headed back into Mount Shasta City where we parked overnight at an auto repair place. At least we had the chance to see Mount Shasta up close for a short time! 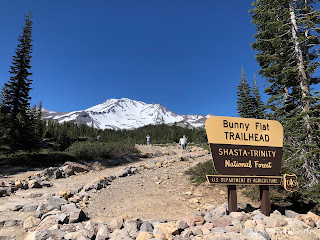 The auto repair guy wasn't able to help us the next morning (other than to say it looked like a generator issue, rather than a fuel tank leak), but they did make a recommendation. Margaret contacted the recommended mobile RV guy, and he was able to look at the generator later that afternoon. Of course, the generator wouldn't leak, no matter what he tried! Grrr. Could it really have fixed itself (possibly the carburetor float unstuck itself)? We'll soon see...NOT(!) because it started dripping again! Margaret is considering replacing the current Onan generator with a nice, quiet Honda generator mounted above the rear bumper for easier access. 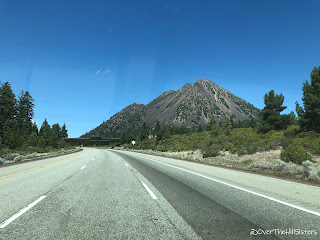 Black Butte from I-5 North. Photo by Virginia.

Since the camping thing didn't work out, we headed north to the town of Yreka, CA, to pick up some necessities. Then we headed back south a bit before cutting over to U.S. Route 97 North. 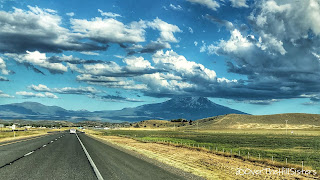 Mount Shasta from I-5 South near Yreka, CA. Photo by Virginia. 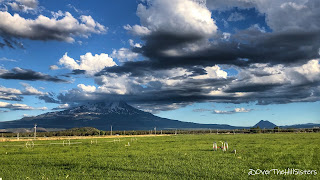 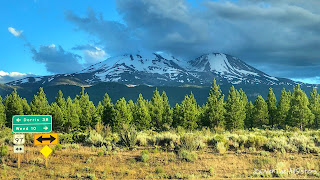 I oohed and ahhed at every view of Mount Shasta as we drove further away. Then at 8:24 p.m. on the 82nd day of our Western States Adventure, we left California and drove over the Oregon border. Whew! California, you did us proud!

NOTE: Clicking on the photos in the post will open them in a larger view (recommended!). If you want to see more photos of the beautiful places we've shared, we have them in this Flickr Collection: Over the Hill Sisters Photo Collection.
By Virginia Hill at 5:37 PM

OMG I hope to read in the next entry that your generator is fine and dandy! Gas leaks are very scary. Your pictures are absolutely stellar.

Amazing pictures, and I always feel like I am traveling with you. So I get all the enjoyment without out the car actual being in a vehicle for hours at a time. You are such a gifted travel teller.

The leak from the generator is very intermittent and small, but the generator is having some issues lately. It’s taking many attempts to keep it running after starting when it’s cold or hasn’t been run recently. I can still get it to start with persistence, but I let it run longer to warm up so it won’t stall when put under load. I really want to replace it with a quiet Honda generator as soon as I can.

It will be fun to revisit our blog and large collection of photos and videos in the future from time to time, especially when we are even MORE “over the hill!”

Dearest Mary Jo, YOU are a most loyal friend and follower of our adventures. Thank you for everything you do! Margaret and I are extremely thankful for your comments and questions and everything else. We hope you continue to enjoy your time with us on the road!