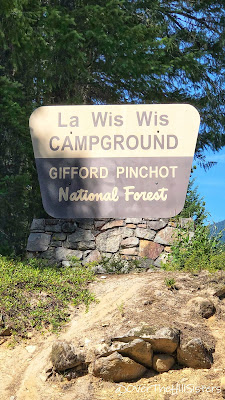 The campground is in an old-growth stand of Cedar, Hemlock, and Douglas Fir trees located in the Gifford Pinchot National Forest. It was rather warm (77°F) when we arrived, but we were pleased to find several available campsites in Loop B. We settled on site #10 and set up camp (which essentially means leveling the Roadtrek, putting out two camp chairs and their cushions, putting up the insulating Mylar and Reflectix in the windows, and shifting our gear from the back to the front). We decided to stay for 5 nights, which, with Margaret's senior pass, made it $10.00 per night. The amenities include asphalt roads and pads, potable water, vault toilets, recycling, and garbage. What we didn't have available (again) was any cell phone signal. 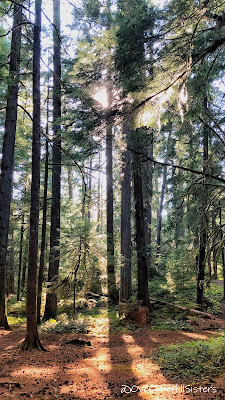 It was extremely quiet for that first day (Wednesday) and evening. And very dark! Those old-growth trees seemed to filter out any of the last quarter moonlight. 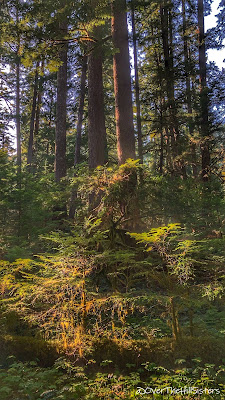 This forest was the first primeval-looking one I have visited. There was lichen and moss covering most every tree and huge ferns among the other varieties of ground covers. There were also flies and mosquitoes, enough to be a nuisance. During the five days we were there, I saw only one chipmunk, a couple of small birds, one Stellar's Jay, a number of crows, and quite a few ravens. I expected to see more than that. Where were they? Hmm…. 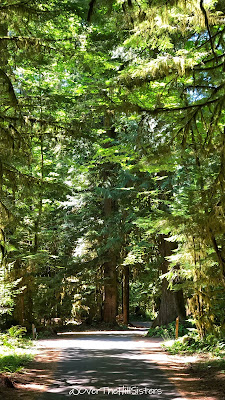 Unfortunately, the breathtaking aspects of the forest weren't just in its appearance; they were also due to the massive amount of campfire smoke trapped by the dense trees because just about everyone but us enjoys campfires. (The fire part isn't the problem; the smoke is.) Smoke is especially a problem for Margaret, who never smoked but still suffers from asthma, COPD, and one less lung lobe due to cancer. One morning at about 3:00, I awoke and could finally smell the woodsy aroma of the trees after a particularly smoky day. How purely fresh it was! 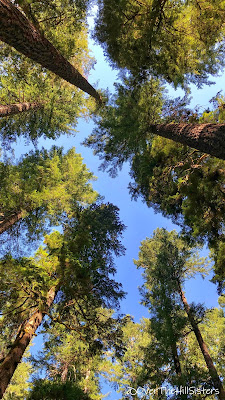 The forest took on a decidedly different appearance one morning, and it was spectacularly different! The bright morning light changed the previously dark and slightly menacing look of the forest. 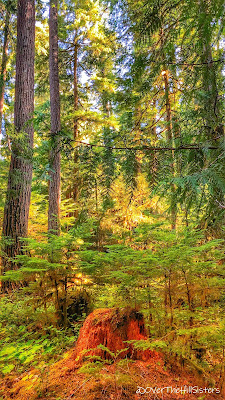 The beautiful glacier melt-water fed Ohanapecosh River runs by the campground, and it offers a serene place to stop and sit. Just look at how lovely a setting nature supplied. 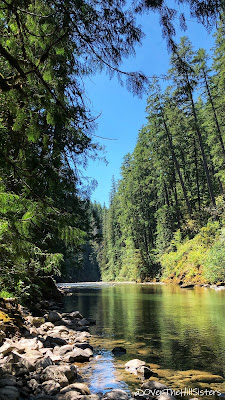 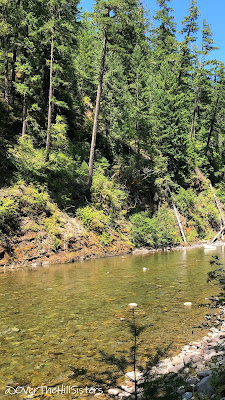 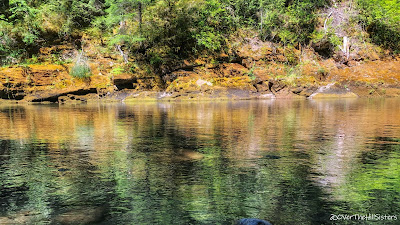 Our last morning at La Wis Wis (29 July) arrived after a quiet and non-smoky evening since most all of the other campers in our loop had already left. After filling our freshwater tank, we packed up to drive anywhere we could actually see Mount Rainier. Margaret went into the Ohanapecosh Visitor Center for a recommendation to do just that. The ranger suggested we go to Tipsoo Lake; so that's where we went. On the way there, we got glimpses of the mountain; but once we arrived, we were finally beyond mere glimpses. Yoo hoo! 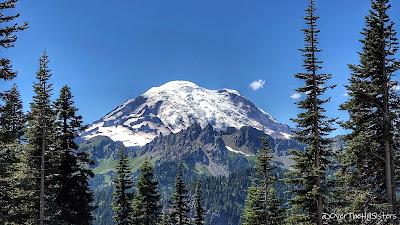 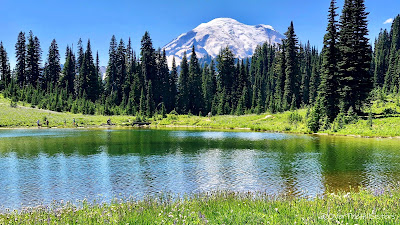 The little walking trail surrounding the lake was crowded with others admiring the stunning views, which are in every direction. Of course, the star is Mount Rainier itself, the volcano of which naturalist John Muir had this to say: "Of all the fire-mountains which, like beacons, once blazed along the Pacific Coast, Mount Rainier is the noblest." 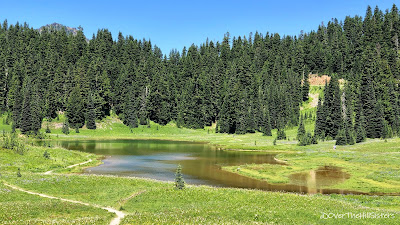 Tipsoo Lake is a favorite spot for photographers wanting to capture the mountain and lake with the area's famously colorful and varied wildflowers. 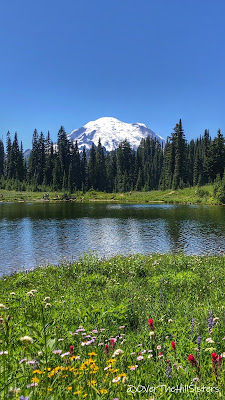 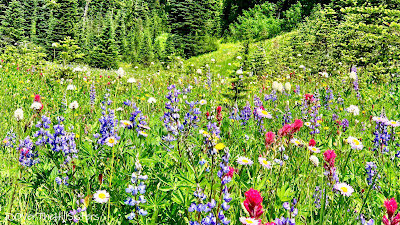 After walking around the lake, taking in and capturing the extraordinary beauty we had so looked forward to, we drove out of Mount Rainier National Park toward Enumclaw, Washington, on State Route 410. On one turnout, we spotted four tiny waterfalls that were so cute I got out to take photos and a video of them. (They and all of our other Washington photos are in our Flickr Collection linked at the end of every post.) What a delight to be somewhere with so much water that it's nearly everywhere you look.

Margaret had the Olympic Peninsula in mind for our next destination; so that's where we were headed before what turned out to be a very pleasant diversion caused us to change our plans. Family time, island exploration, and some sailing is coming up in our next post.

NOTE: Clicking on the photos in the post will open them in a larger view (recommended!). If you want to see more photos of the beautiful places we've shared, we have them in this Flickr Collection: Over the Hill Sisters Photo Collection.
By Virginia Hill at 10:23 AM