We left our second time staying overnight at the Peter Skene Ogden State Park on 22 July and headed north on U. S. Route 97. We drove through miles of cotton and alfalfa fields and the pretty little town of Madras, Oregon. We had a view of Mount Jefferson to the west, while rugged volcanic cliffs were to the east; and through a rather thick haze, Mount Hood eventually became visible. I hadn't seen Mount Hood for twenty-two years! Fortunately, the closer we got, the clearer the sky became. We then drove west toward the busy metropolitan area of Portland, Oregon, because it was Margaret's birthday, and she really wanted lunch from Native Foods Café. While there are three Native Foods Cafes in San Diego (our home base), there is only one in the entire Pacific Northwest! That scrumptious lunch was served in the swanky Bridgeport Village Mall in Tigard, Oregon. We parked in the shade to eat our lunches, which meant Peaches could be let out of her crate (happy girl!). Staying for a few hours allowed us to catch up on our iPhones before it was time to go to French Prairie, a nearby rest area to park overnight. 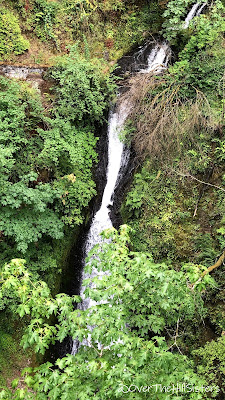 Continuing west on the Historic Columbia River Highway, the next waterfall is Latourell Falls, which is a plunge style fall. It is clearly visible from the road and makes for a dramatic photo. 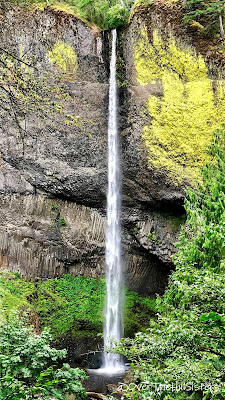 Our next stop was the Vista House at Crown Point. It had been closed when I visited in the late '90s; so it was particularly rewarding to see it open, busy, and thriving. Inside you can learn about its fascinating history, gather information on the area, visit the gift store (where I bought post cards for my daughter), and buy coffee and edibles at the espresso bar. The view of the Columbia River and Gorge from Vista House at Crown Point is absolutely stunning! 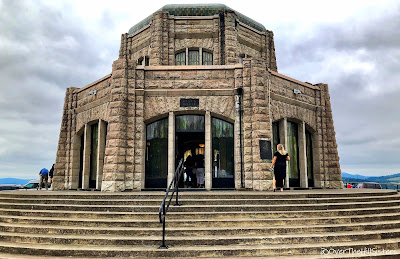 
[If you have trouble viewing this embedded movie, you may view it directly on YouTube here: https://youtu.be/4LTXkB6lCXk] 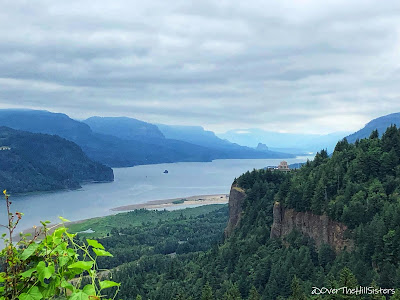 Further west on the Historic Columbia River Highway, we took a left and headed up E. Larch Mountain Road. It is a two-lane winding highway which took us through soaring trees and a dense fog bank. Once we reached the parking area of Larch Mountain (elevation 3,900 ft.), we were rewarded with a bright blue sky and wispy pockets of clouds that rolled right by us. It was quite dramatic. It was also only 56°F at 1:00 in the afternoon(!)—a drop in temperature of 12° from where we had been at the first two waterfalls. We walked only part way on the Sherrard Point Trail because there were just too many stairsteps for us (100!). We returned to the Roadtrek to make our lunches, which we took with us to eat at one of the picnic tables tucked away under the trees. It was so cool that even I was almost cold. Oh, and we were visited by a very curious chipmunk. We never feed wildlife, but it had obviously been fed by humans before and was quite the brave little beggar! Sorry for no photos of it, but Peaches wasn't going to allow it to get close enough for a good closeup photo. 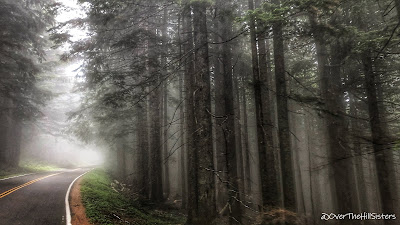 As we were descending Larch Mountain Road, we noticed it had rained, whereas it had been all blue skies and dry where we had picnicked only a short while previously. Once back to the Historic Columbia River Highway, our next stop was Wahkeena Falls. This two-tiered waterfall cascades over rocks and through greenery right next to the observation point and under a small bridge where it eventually feeds into the Columbia River. (Check out the movie above, which includes video of Wahkeena Falls.) 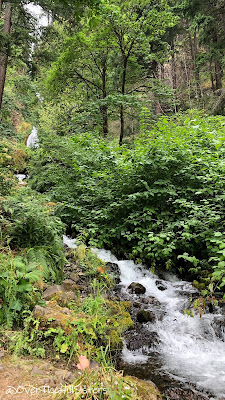 With Multnomah Falls being our next waterfall destination, I asked Margaret to pull over to the side of the road just beyond Oneonta Tunnel, which is closed and gated to all traffic. After photographing the tunnel, I turned around to see the view directly below. I think you might appreciate just how grand the cliffs and trees of the gorge are, especially in contrast to how tiny our home on wheels looks in scale. 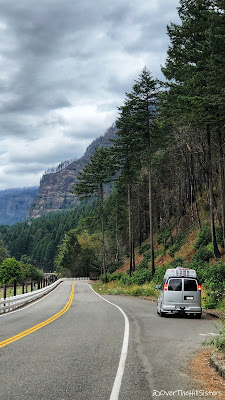 The Roadtrek on the Historic Columbia River Highway. Photo by Virginia. 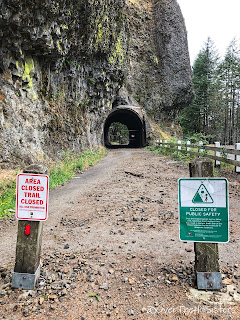 The Oneonta Tunnel. Photo by Virginia.

Multnomah Falls is just minutes beyond the tunnel, but it is the most notable of all of the falls in the gorge; and during peak season, finding a parking spot would test anyone's patience. After attempting to turn left into the lot next to the falls for many minutes, we decided to delay Multnomah Falls and proceed to Horsetail Falls, which I've determined, after this visit, is my favorite. This waterfall is a superb example of the "horsetail" style, is extremely visible and accessible, and is uncrowded and quiet, particularly compared with the madhouse at Multnomah Falls (which I would prefer to visit in nonpeak times, if that were possible). 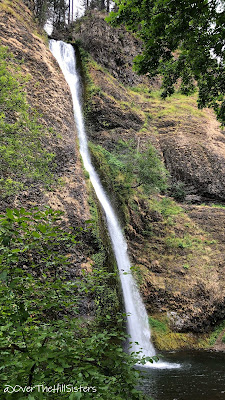 After literally soaking in the grandeur of Horsetail Falls, taking lots of photographs and video, and walking down into the pool, we were ready to brave the crowds at Multnomah Falls. We continued east on the historic highway just a short distance where we could take Interstate 84 back west to a secondary parking area for the falls. We had no trouble finding a parking space there; and with just a very short walk to and under I-84 and a railroad bridge, we were there at the falls and Multnomah Falls Lodge. As singularly stunning as the waterfall and the lodge are, the huge numbers of people there that day and the food vendor booths (which were not there when I had last visited) had me feeling this natural wonder is too much like an amusement park now. In that respect, I was quite disenchanted. The waterfall itself is as impressive as ever, though, even with the nearby ridge of trees burned in the Eagle Creek Fire in 2017. Knowing about the fire and seeing just how close it came to this and other landmarks put it all into perspective for me. The devastation has changed the landscape for a very long time, and many trails in the area remain closed. 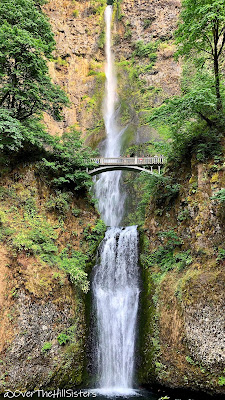 The total height of Multnomah Falls is 635 feet; and Margaret, using her trusty iPhone camera, was able to capture the top, the drops, Benson Bridge, and the pool so beautifully. We sat in a couple of provided chairs for awhile just gawking, although I found myself trying to tune out all of the crowd noise and concentrate on the music of the falls. It is considered to be the best waterfall in Oregon, but it is world renowned and deservedly so.

We were able to find a single parking spot at a viewpoint in Corbett where I was able to get the image below. (If you click to enlarge it, you can see Vista House on Crown Point.) With just beauty and grandeur in the photo, I imagine it might be difficult to consider how noisy, littered, and crowded it was. In fact, I was disheartened by the condition of the man-made improvements. The beautiful old stone bridges, walks, and viewing areas were littered, dirty, and had weeds growing up through the mortar. Even with plenty of trash receptacles available, there was a great deal of litter, especially at Multnomah Falls. Why go to these beautiful places just to trash them? I will never accept or understand how humans can be so disrespectful to nature. 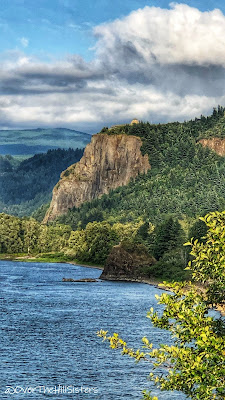 We ended the sightseeing part of our day at 6:30 p.m., and we were extremely tired and hungry. We gassed up the Roadtrek in Troutdale and found a Chinese restaurant conveniently located next door to the gas station. Margaret treated us to dinner to-go; and because after exhaustive searching, we couldn't find a legal place to park overnight anywhere near our location, we decided to go back to French Prairie Rest Area on Interstate 5. It was nearly 10:00 p.m. when we had the Roadtrek ready for us to sleep and could eat our delicious dinners. Ahh. It had been an extremely long and busy day; but even with the minor disappointments, we each appreciated that we were suitably awed and delighted by all of the remarkable and unique splendor of the Columbia River Gorge. The next day we crossed over the Columbia River into Washington State. Stay tuned for those adventures. Thanks for traveling with us!

[Note: Clicking on the photos in the post will open them in a larger view. If you want to see more photos of the beautiful places we've written about, we have them in this Flickr Collection: Over the Hill Sisters Photo Collection.]
By Virginia Hill at 6:18 PM